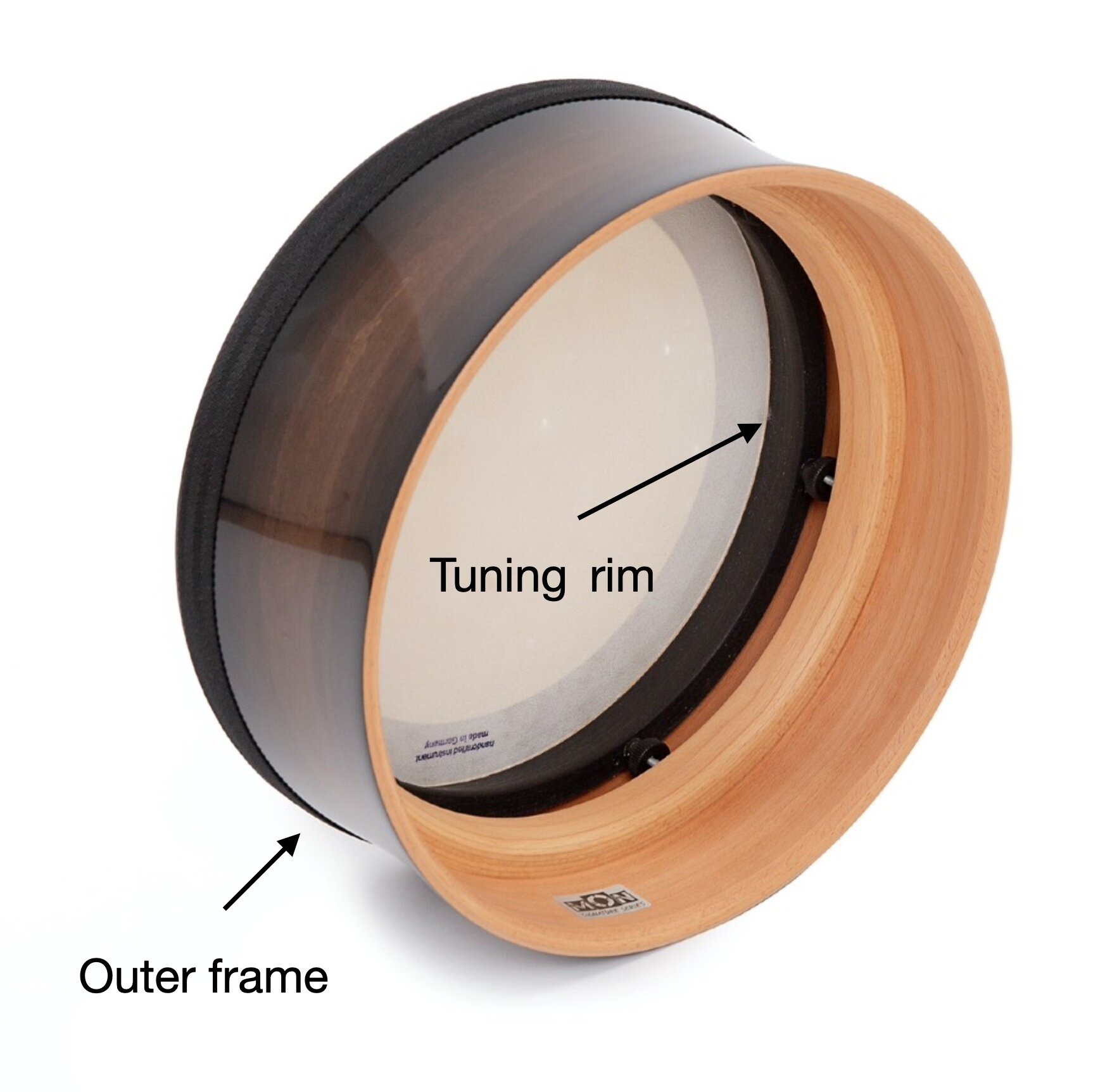 The outer frames and tuning rims of my bodhráns are made of laminated solid wood.
This is also one of the biggest differences of HED bodhráns compared to most competitors, who mostly just cut ready-made plywood boards into strips and then glue a drum frame out of 2 or 3 such planks. This is not wrong in principle, but simply not my quality standard.
As with so many details of my instruments, I go the "extra mile" simply because it is higher quality and more sustainable.
You can feel, hear and see that.
I use mainly local red beech, but also as required figured ash, maple, figured maple, walnut, cherry, ash, oak, poplar and fine grained spruce.

In terms of sound, the wood of the outer frame is not as decisive as, for example, on the violin, flute, guitar or even classical drum kits.
The sound-deciding component of the bodhrán is much more the TUNIGN RIM. The type of wood, dimensions and profile cross-section determine the acoustic qualities of the instrument's sound. This is individually adjusted depending on the model, use and skin selection. The tuning frame an enormous influence on the overall sound and tone color, this great influence of the tuning frame is again significantly increased with the IsolatHED tuning technology.
That is, the outer frame simply must provide a stable environment for the drum skin to work optimally with the tuning rim.
It is important that the outer frame provides a certain inertia, and thus a certain weight. Outer frames that are too light make the overall sound of the drum thin and weak. In short, the drumhead must vibrate, not the outer frame.
So the outer frame mainly provides playing comfort and nice aesthetics. It also influences the sound projection. But not the sound COLOR.
For more information, please refer to "tuning" and "isolatHED tuning technology".

Concave frames have established themselves as a real HED specialty.
I am often asked if this improves the sound. For the reasons mentioned above, the outer frame has little direct influence on the sound quality. However, due to the snug shape, the drum sits better on the thigh. Many customers confirm a generally better playing feel with concave frames. The more pleasant feel can lead to more relaxed, better playing, and thus the concave frame indirectly improves the sound as well. In addition, with a concave frame, the overall weight of the drum decreases. 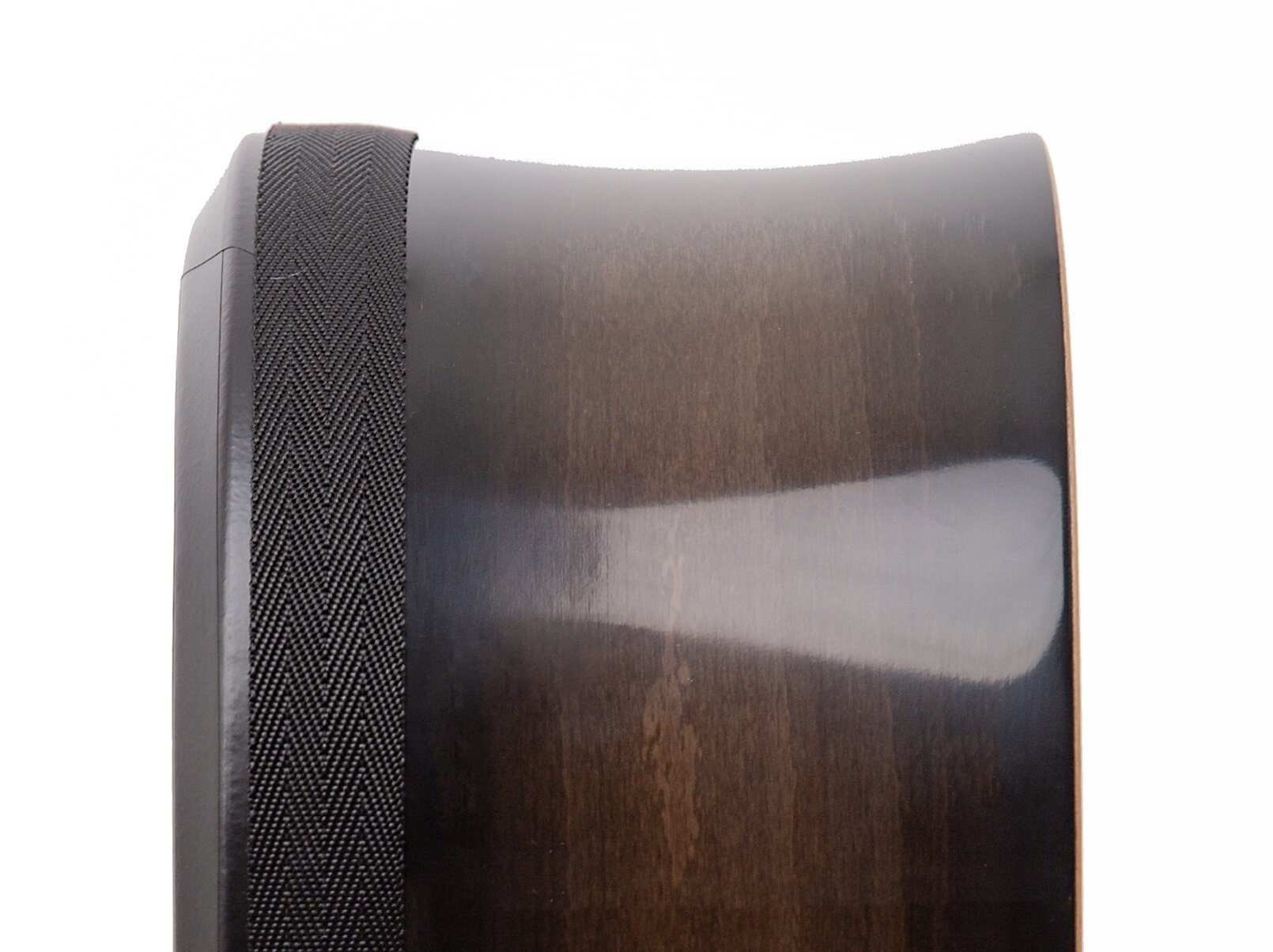 It is a common myth that a deeper frame makes "more bass".
This is not true, especially with the bodhrán, which is a single-headed frame drum. Due to the construction (frame depth smaller than diameter) and the way it is played (one arm in the inside of the drum), we do not have a resonance chamber with the bodhrán as we do with the snare drum, for example.
With the bodhrán, the outer frame must above all prevent the so-called "acoustic short circuit", i.e. that the air pressure created by the vibration of the drumhead is not balanced directly at the rim of the head, but that the sound can spread out in space.
For this purpose, a frame depth of 5 cm is already sufficient, as can be found, for example, in oriental frame drums.
In addition, the frame depth of the bodhrán should never be considered in absolute terms, but always in relation to the diameter.
A small frame depth with a large diameter, e.g. as with the TrHED (45x14cm), ensures a large spread of the sound, since the sound can be emitted at a very large angle. This is referred to as an "open sound".
On the other hand, a large frame depth with a small diameter, e.g. MONss or CoreLine bullet (35x15cm), compresses the sound and the sound is emitted at a shallow angle. This is called a " directed sound ".
However, this has very little to nothing to do with the quality of the bass or the sound in general, i.e. with the COLOR of the sound.
This is mainly influenced by the choice of head (stiff or flexible, thick or thin, with or without spine...), the tuning rim and the DRUM DIAMETER.
With a large drum, for example, the head can vibrate longer and has a larger vibration stroke, so the drum is LOUDER. But it does not necessarily have "more" or "less" bass. The bass is then depending on the skin just OTHER. So rather short and crisp as with a bass drum or long-swinging and "roaring" or "roaring" as with a shaman drum.
So the most important thing with the frame depth is and remains PLAYING COMFORT.
You must feel comfortable with the drum. Here, the physique and arm length as well as the individual playing technique must be taken into account.
The standard depth for straight frames has turned out to be 14cm, and for concave frames 15cm.

The drum diameter is determined according to the body size/arm length but mainly according to the desired sound ideal.
Small drums vibrate shorter, therefore need for example a more flexible head than large drums, so that the head can still vibrate properly.
Large drums vibrate longer and can therefore tolerate a thicker, harder head. Skins that are too soft and thin would really "sink" here.
This means that small drums tend to have a short, defined, more tonal sound, while large drums tend to have a "wilder", more percussive sound.
Since a diameter of 37cm has established itself as the most commonly played size, the ChangeHED head support system, for example, was also designed precisely for this diameter.
It is often assumed that with the bodhrán a larger diameter automatically means more bass. In contrast to other drums, like the bass drum at a drum kit, the equation larger diameter equals more bass applies here only to a very limited extent. On the one hand, we are talking about a range between 30 cm and 45 cm, i.e. a maximum difference in diameter of 15 cm, and on the other hand, the bass sound is determined primarily by the skin. As explained above, the skin must fit the diameter of the bodhrán perfectly.

As described above, these are purely optical design options that have nothing to do with the sound.
The sole purpose here is to create an unique appearance and, especially in the case of custom-made instruments, to achieve the highest possible degree of individuality.
Countless veneer types, color tones, also effect lacquering and foil coatings are offered by me.

For some players, such a cutout in the arm helps them to hold/play. But these are exceptions.
Normally such a cutout hinders more than it helps, because the holding position of the drum is fixed.
This usually limits the playability and leads to a faster and punctual wear of the drumhead.
Drums that have a homogeneous head and a continuous frame can be permanently rotated a little while playing. This keeps the drum more tunable (hand sweat is distributed more evenly on the drumhead) and the head is played and worn more evenly.
If a deep frame causes you problems when playing, I recommend a shallower frame depth instead of a cutout.